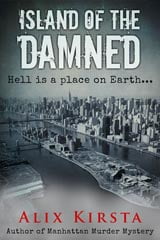 These days, Welfare Island is a verdant, residential retreat which was renamed Roosevelt Island in 1973. But in the earlier 20th century it was notorious as the â€œworst and most unmanageable prison in the world.

The grotesquely misnamed Welfare Island was known to most New Yorkers as the city’s most wretched hell hole, the setting for some of the darkest episodes in the city’s history since the mid nineteenth century.

When the City officials MacCormick and Marcus organised a raid on the prison in 1934 they had no idea what they were about to stumble upon. Emaciated and scarred inmates, rife with self-mutilation, drug withdrawal and addiction, were crammed into stinking cells kept in appalling conditions.

While shipping them off to hospitals and alternative prisons, the officers discovered a large-scale drugs trafficking operation run by notorious mobster inmates and facilitated by prison staff. As they delved deeper into the workings of the prison it soon became apparent that the scale of the corruption was larger than they ever could have anticipated. The whole of New York was contaminated.

But who was controlling this widespread ring of crime and corruption?

And what dirty secrets were being hidden on the Island of the Damned?

‘Island of the Damned’ is the compelling true story of New Yorkâ€™s most brutal prison. It is a compelling mix of social, political, and criminal history – essential reading for anyone who wants to understand New York’s past.

More articles on my web site

This website uses cookies to improve your experience while you navigate through the website. Out of these cookies, the cookies that are categorized as necessary are stored on your browser as they are essential for the working of basic functionalities of the website. We also use third-party cookies that help us analyze and understand how you use this website. These cookies will be stored in your browser only with your consent. You also have the option to opt-out of these cookies. But opting out of some of these cookies may have an effect on your browsing experience.
Necessary Always Enabled
Necessary cookies are absolutely essential for the website to function properly. This category only includes cookies that ensures basic functionalities and security features of the website. These cookies do not store any personal information.
Non-necessary
We use google analytics to collect user data which lets us understand better how the site is used. This generates cookies which are termed \'non-necessary\'. Before these cookies can be stored on your device you must opt in to allow us to do so. Opting out will not affect your user experience. You should read google\'s privacy policy here, and their terms of service here. By opting in you are implicitly consenting to these terms.
SAVE & ACCEPT